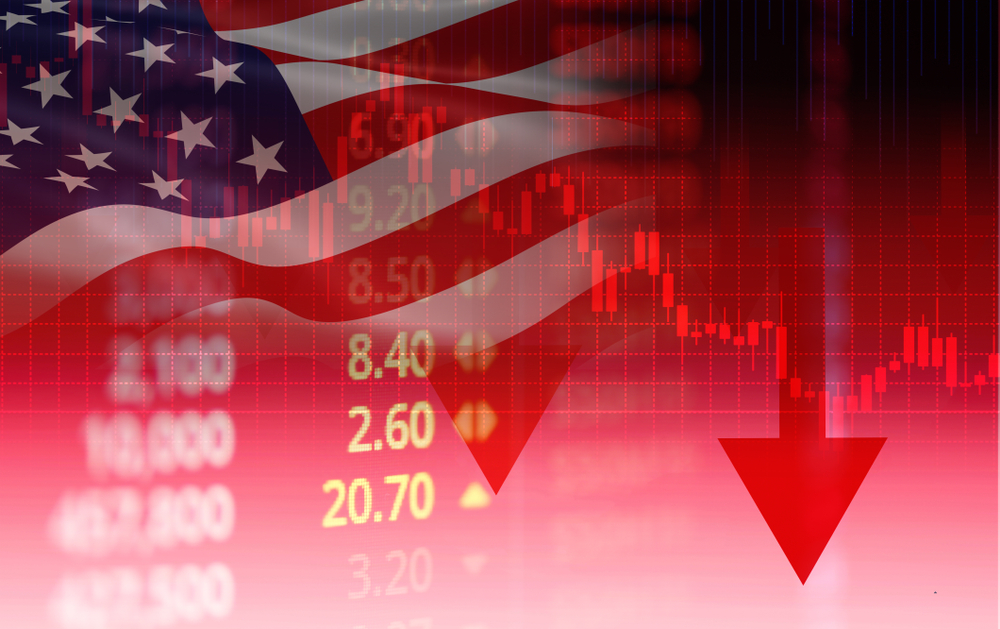 What’s the “E” in P/E Ratio?…Nobody Knows and That’s a Problem

The S&P 500 Index closed Friday at 2,488.85, down 2.1% on the week. A typical bear market rally of 17.5% which retraced 35% of the 1,151 point decline in the Index, ran out of gas on Tuesday. There has been much speculation that the first bottom of the 2020 bear market is now in place and will soon be tested. This is wishful thinking at best since nobody knows how long the social distancing and quarantine mandates will stay in force and what the longer term effects on the U.S. economy will be.

What we do know is that the jobs market is contracting with a loss of 701,000 jobs and an unemployment rate of 4.4% in Friday’s non-farm payroll report. This at a time when unemployment claims totalled a record 10 million over the past 2 weeks, with the worst likely ahead of us. While the headlines focus on the carnage in the Airline, Hotel and Leisure stocks, small businesses are hurting as well. Worst case estimates, assuming that sheltering in place continues into May/June, are that 50% of small businesses with under 5 employees may never recover.

Here’s a chart of the potential job losses by industry if we can’t reopen the economy in the 2nd quarter. 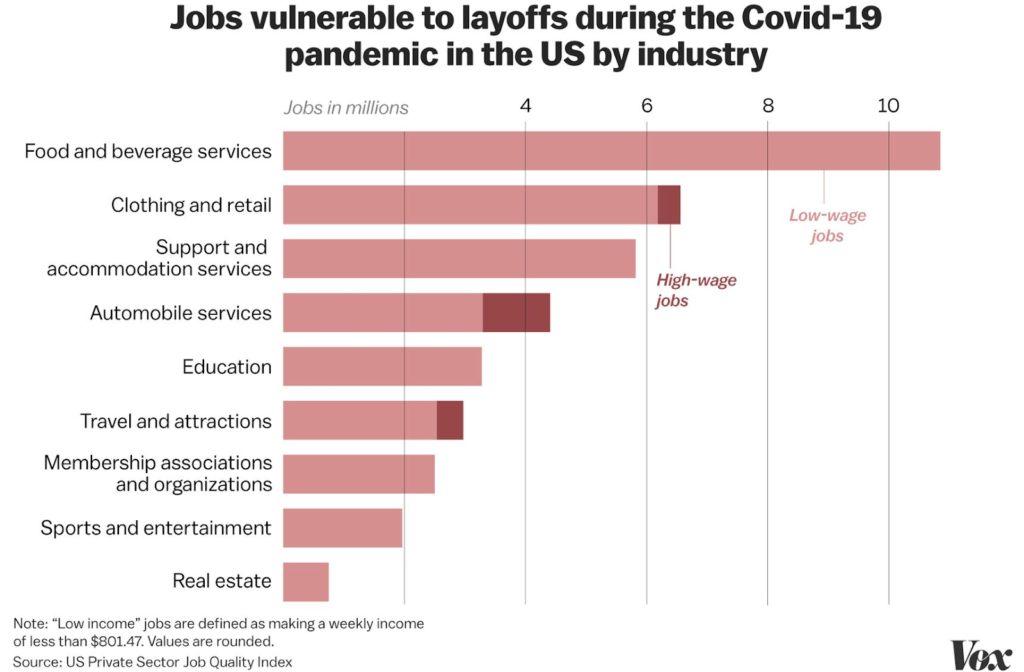 The effects on the American psyche of massive 20+% unemployment can only be known after the fact. Sheltering in place, if deemed to be needed, for another 2 or 3 months may prove that “cabin fever” is as damaging as the virus.

I wish I had a crystal ball but in lieu of one I’ll watch and wait for the spread of the COVID-19 virus to be contained. Hopefully biotech research will find a treatment and ultimately a vaccine but much testing still needs to be done. My layman’s reading of what’s needed to effectively flatten the curve and reopen the economy, is more testing to determine who is infected and where new hot spots will emerge and blood tests (serology) to determine who has developed antibodies through exposure to the virus.

In the 7 previous bear markets that I’ve experienced, the leveraged institutions contribute to the 1st wave down as margin calls and, now, computer algorithms accelerate the decline. Then we see analysts looking for a bottom and a retest, which is what I’m hearing now. As long as investors are still looking for a bottom and seeking bargains the final lows have not been seen.

Here’s The Risk For Investors

In a headline driven, existential health crisis like we are experiencing, human emotions play a big part in the ultimate outcome. We won’t see a buyable low, in my view, until the public stops looking for a bottom and throws in the towel. Call it despair if you will, but it’s what has created every bear market low that I have seen, except for 1987.

Crude oil rallied 30% last week on the hope that President Trump can broker a truce in the price war between Russia and Saudi Arabia. While the hoped for 10 million barrel a day production cut might happen, the two oil titans are already sniping at each other and the virtual OPEC meeting has been delayed a few days.

I believe that the rally in energy stocks this past week is an opportunity to exit weaker holdings, because only the strong are likely to thrive going forward. Even if supply is cut where is the demand going to come from?

As we head into 1st quarter earnings season which begins on 4/14 when the major banks report, we are likely to see very few companies go out on a limb and forecast their future results. Thus valuations for the stock market will be virtually impossible to conjure up. If there is no “E” in P/E ratios how can value be determined? In the unreality of an economy shut down to battle a war against an unseen enemy, economic forecasts are just bad guesses.

Initial projections on 2020 GDP from the major investment banks ranged from down 20-30% in the 2nd quarter and a “V” shaped recovery beginning in the 3rd quarter. Two major banks are now projecting negative GDP growth in Q3 based on uncertainties on when the economy will restart and what demand will look like when it does reopen for business.

What Should An Investor Do Now?

Until the spread of the COVID-19 virus peaks and we are closer to a reopening of the U.S. economy, sell rallies and sit on your cash.

If we are fortunate to see an effective treatment there will be plenty of capital gains opportunities. For me capital preservation is more important than capital gains.

Use sharp bear market rallies, like we saw last week, to raise sufficient cash to enable you to withstand further declines without panicking…in other words sell down to your sleeping level on rallies.

Stocks are in a bear market, having experienced a jaw-dropping 34% decline in just 4 weeks. Let’s look at some historical examples to get a handle on what to expect going forward.

First let’s look at all bear market declines going back to the great depression.

There have been 6 bear markets with declines greater than the current drop of 33.9%. As noted above, 3 of them were in the -50 to -60% area, leaving out the 86% decline in the great depression. Given the uncertainties about the containment of the COVID-19 virus, the depth of the decline in GDP in the U.S. and the shape of the subsequent recovery in the U.S. economy, investors should be prepared for a minimum decline of 50% to the 1,700 level on the S&P 500 Index. Only a surprise breakthrough in containment or prevention can stem the decline in stock prices.

While there may be more sharp bear market rallies of 10 – 20%, seemingly coming out of nowhere, a true market bottom is likely many months away. 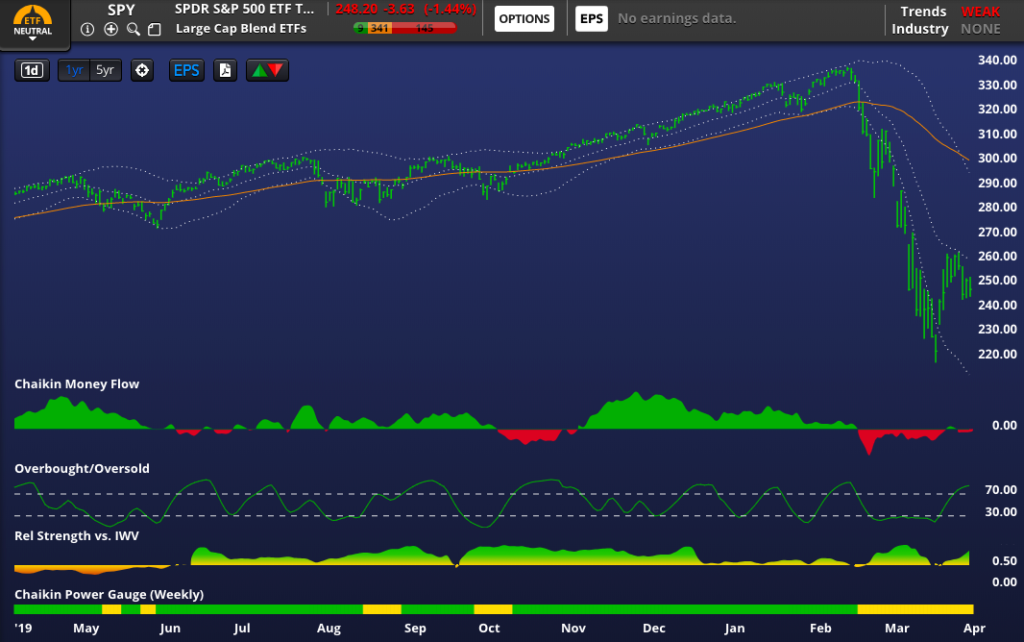 S&P 500 Index got overbought on Tuesday as a 35% bear market retracement rally petered out. The 17.5% advance is typical of bear market rallies since 1945.

The late week’s selling stopped at modest support at 2,450, but the headlines about the COVID-19 pandemic are clearly driving stock prices and will continue to do so. With the economic impact of the pandemic dependent on when the quarantine mandates are lifted and how soon life goes back to “normal”, forecasting stock prices based on technical indicators or sentiment is problematic.

What we do know is that the 200-day average for the S&P 500 Index is at 3,020 and falling. This technical pattern has typically seen rallies fail in past bear markets. If there is any good news it’s that volatility has contracted, with a 29% drop in VIX to a reading under 50 for the first time since 3/6.

While some analysts see the first bottom as having been established, I see that as pure conjecture or wishful thinking. The longer social distancing and sheltering in place shut down the service sector in the U.S. the further prices are likely to fall. 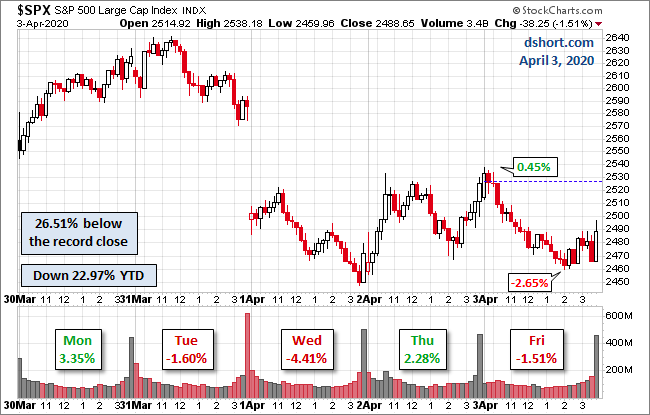 Tuesday’s peak at 2,640 was a 34.4% retracement of the 1,151 point decline in the S&P 500 Index. The bear market retracement rally fell just short of a .382 Fibonacci retracement. Wednesday’s low at the 2,450 support level is likely to be tested early this week.

Chaikin Screen of the Week

Now is the time for long term investors to do your homework and create a watch list of potential buy candidates. While we advocate holding on to your cash, we recognize that some investors want to dollar-cost average.

Logic says that two prerequisites for buy candidates are low debt to equity and a history of strong earnings growth. I would add to this that they should be in industry groups that are outperforming the broad market.

14 stocks in the S&P 500 Index passed the screen, including a mix of healthcare and technology stocks. Monitor these stocks for opportunities to buy on extreme weakness in the weeks ahead.

The Power Bars for all 3 major indices remain in deeply negative territory but have improved over the past two weeks. The Biotech heavy Nasdaq 100 Index (QQQ) has been the most resilient with 8 bullish ranked stocks. 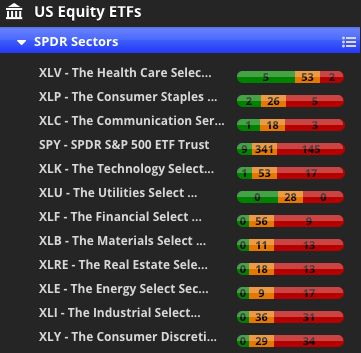 Generate a Portfolio Health Check on any of the Select SPDR Sector ETFs, and see which stocks within the sector have bullish or bearish Power Gauge ratings. The stocks in the bottom left of the Power Grid are sale candidates on rallies. 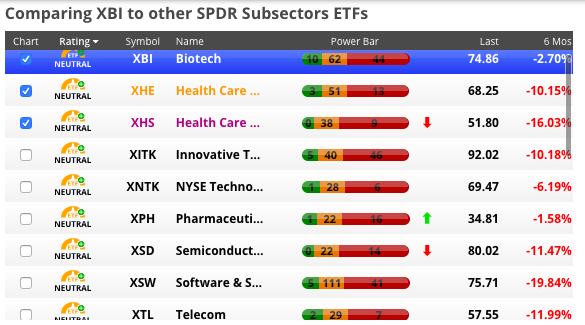 The above is the same comment we made in Market Insights 2 weeks ago and a quick check of favored biotech companies Regeneron (REGN), Vertex Pharmaceuticals (VRTX) and Biogen (BIIB) show substantial gains over the past 2 weeks. 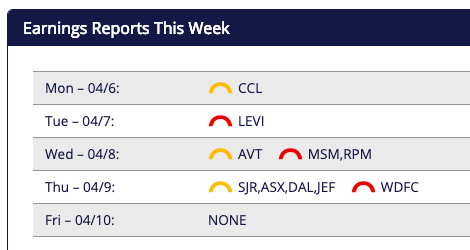 The following stocks saw their Power Gauge Ratings turn Bullish or Bearish ahead of this week’s earnings reports.

Last Week’s Bearish Put Spread Recommendation on the IWM Small Cap ETF closed the week with a gain of 30%. 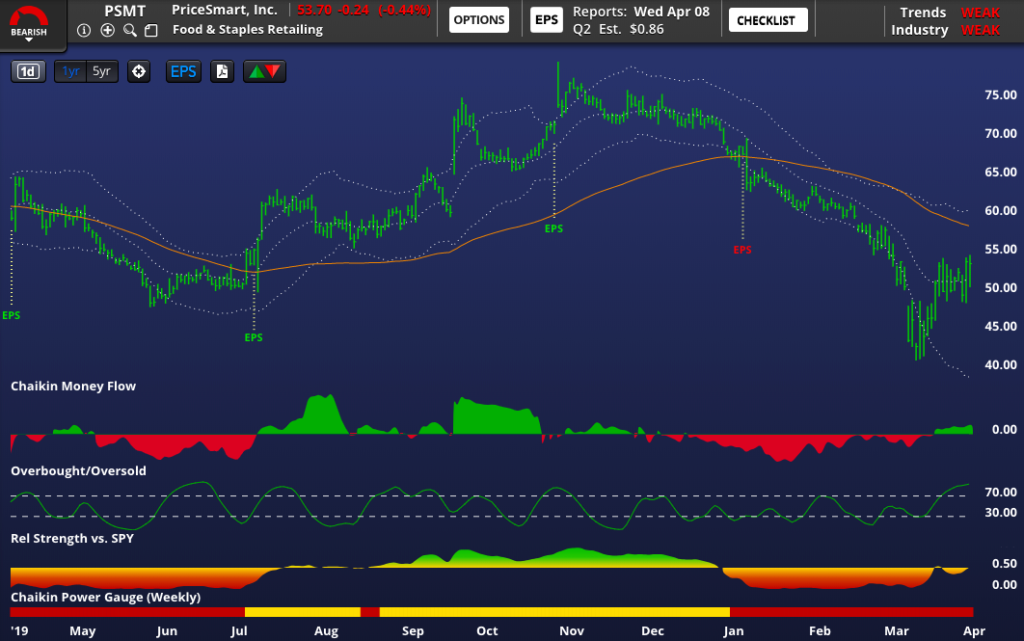 PriceSmart has a bearish Chaikin Power Gauge Rating. The company operates U.S. style warehouse stores in Central America, the Caribbean and Colombia. PSMT is benefitting from the same consumer buying surge as Costco and other U.S. big box stores. PriceSmart reports earnings after the close on Wednesday.

It is hard to imagine PSMT reporting or saying anything positive in this environment.

Sell PSMT on any strength, which often comes in weak stocks ahead of earnings reports, leading up to Wednesday’s earnings report. A close above $60 would negate our thesis, while a negative reaction to its earnings report could take the stock down to our lower band which is currently under $40. 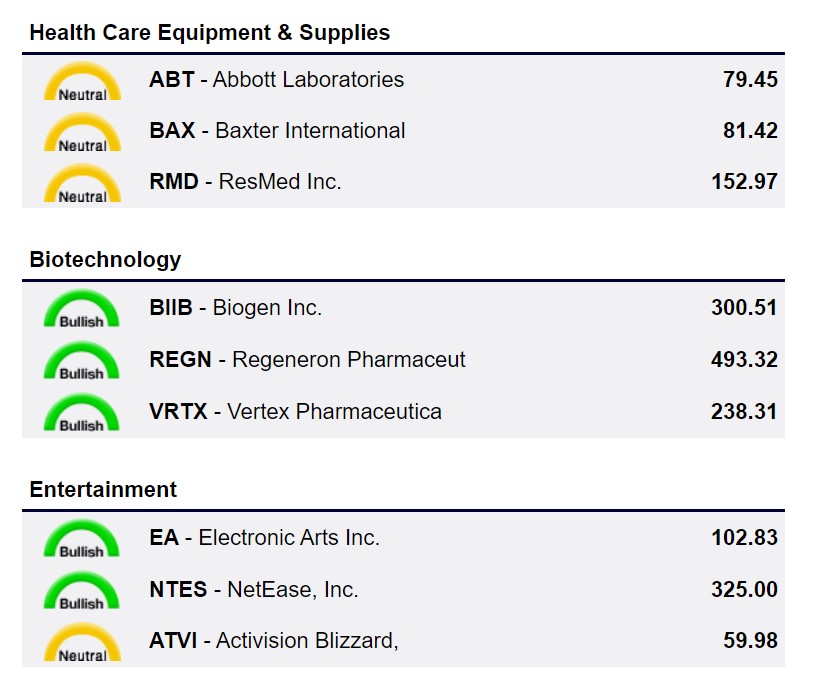 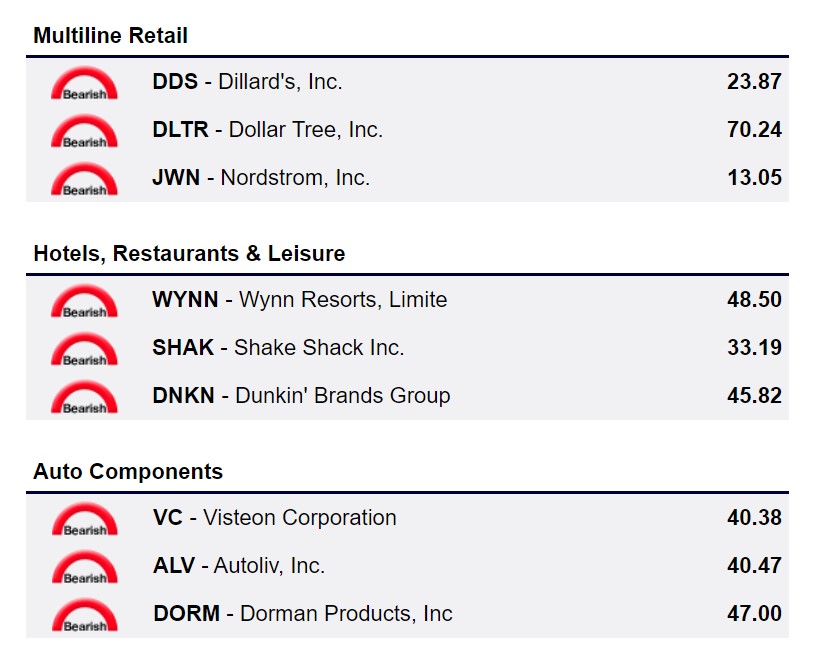