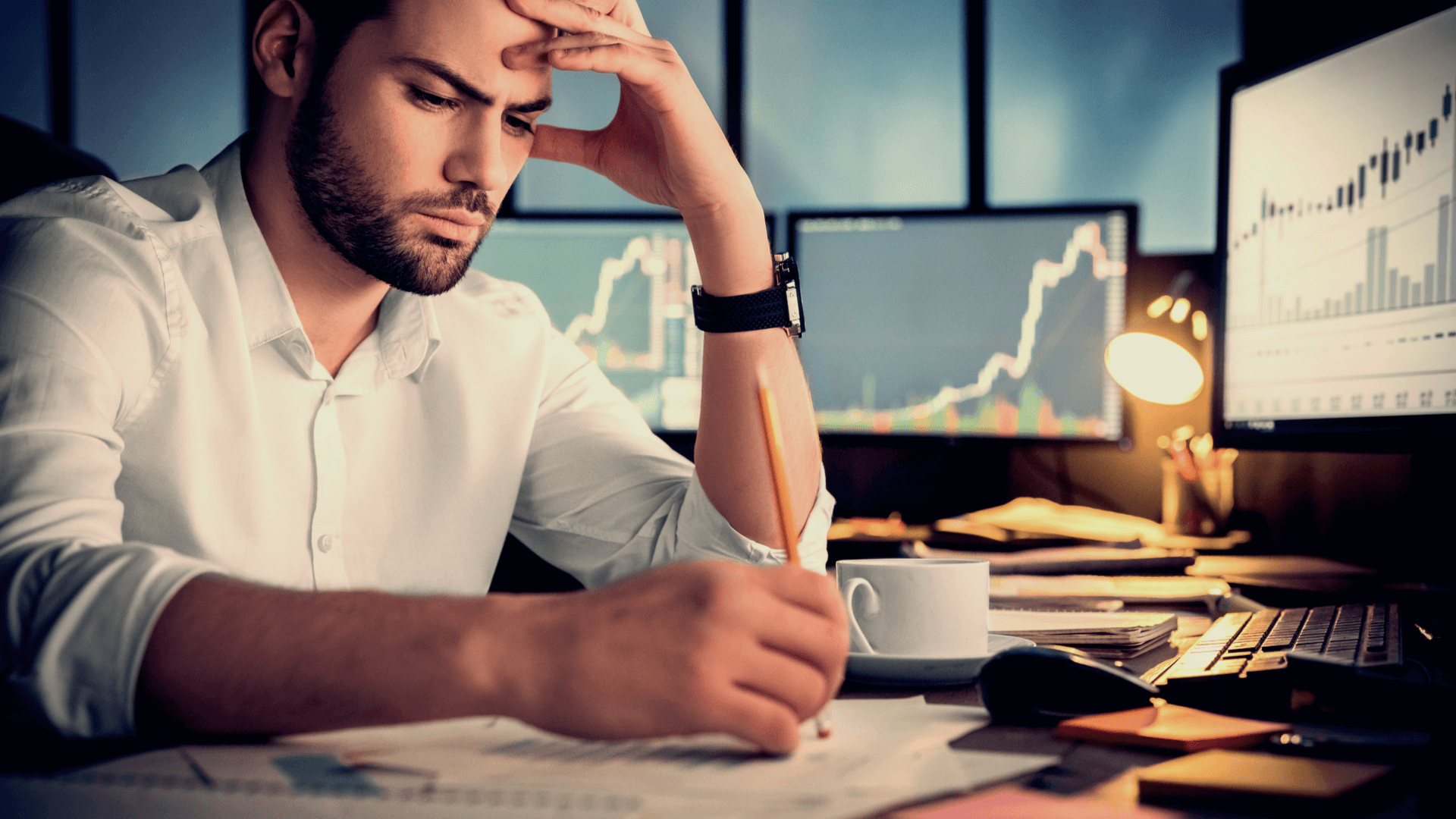 The VanEck Vectors Semiconductor ETF (SMH) has a Neutral + Chaikin Power Gauge ETF Rating and continues to lead the SPY (though relative strength has been diminishing of late). The fund is overbought based on our indicator and Chaikin Money Flow is slightly bearish. SMH is below the declining long-term trend line and has a bearish Power Bar Ratio at one to six. 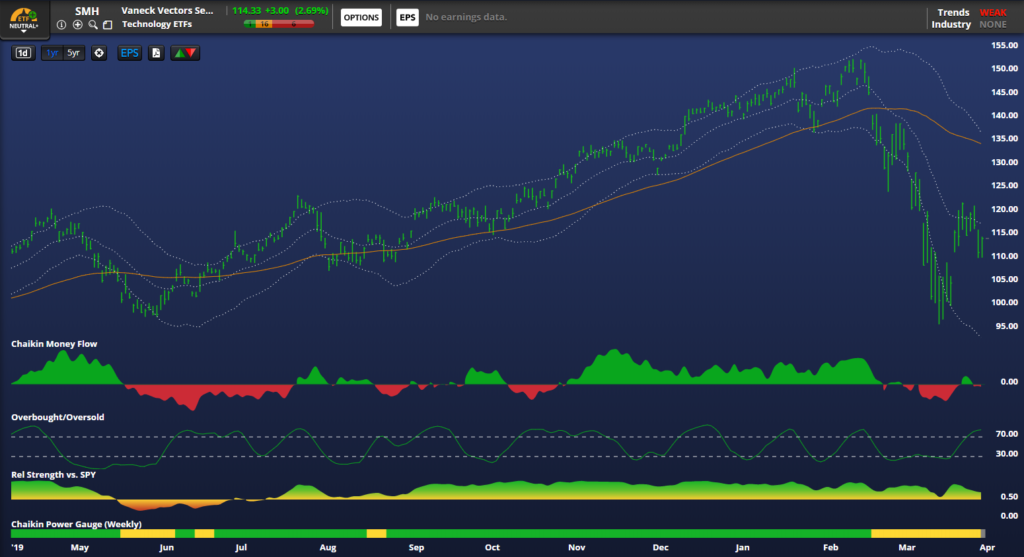 While yesterday’s screen focused on companies that could see trouble the longer the COVID-19 economic slowdown persists (based on debt and free cash flow), today we take the opposite approach. We screen the Russell 3000 for mid and large cap stocks that meet the following criteria:

The screen returned 53 names that can be watched for opportunities. Adding in strong money flow and relative strength, the list falls to nine nams.

As of this morning, none of the stocks on this screen are oversold.

US equities finished higher in Thursday trading and closed near the best levels of the day. Energy, Health Care and Consumer Staples outperformed. Consumer Discretionary lagged, though all sectors finished higher on the day. Treasuries were mixed with the curve flattening. The dollar rallied vs the euro and the yen. Gold finished up 2.9%. WTI Crude settled up 24.7%.

The SPDR S&P 500 ETF (SPY) continues with a Neutral + Chaikin Power Gauge ETF Rating and remains an outperformer relative to the IWV (Russell 3000 ETF). From a price perspective, ignoring the day-to-day gyrations in a market where the VIX is above 50, we can see SPY is stuck between support near $230 and resistance near $265. At current levels, that leaves ~13 points of upside for 22 points of downside. At the same time, the OB / OS Indicator is overbought and Chaikin Money Flow is bearish. The declining long-term trend line is near the $300 mark. 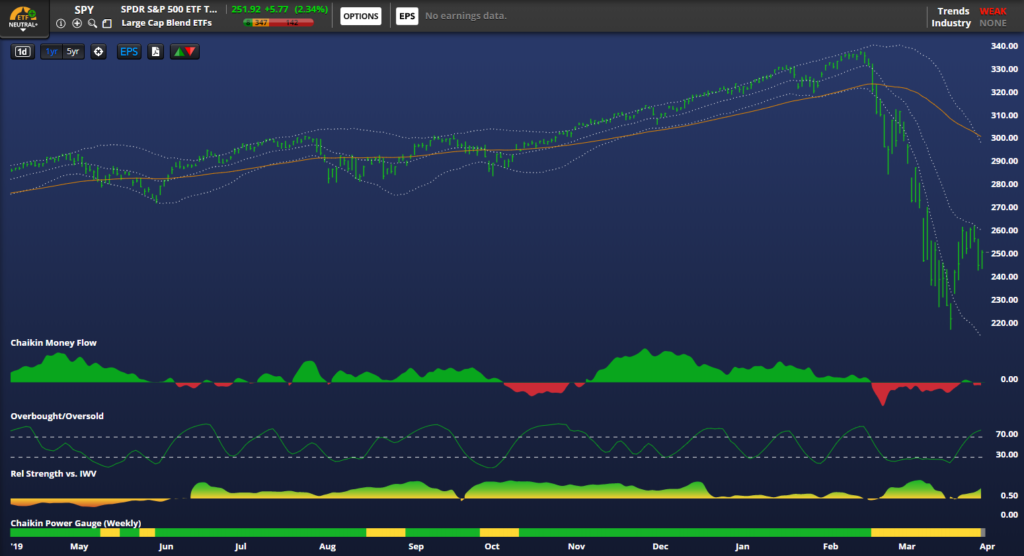 S&P futures are down 1.1% in Friday morning trading. Asian markets were mostly lower overnight and European markets are trading lower as well. Treasuries are unchanged to slightly stronger. The dollar is seeing good gains on the major crosses. Gold is down 0.5%. WTI Crude is up 2.5% after rallying ~25% yesterday.

The relationship between high yield bonds (HYG) and intermediate term treasuries (IEF) continues to trade below the 200-day moving average and the 2016 lows. The RSI is no longer oversold but continues to trade in bearish ranges.

Small Caps Relative to the S&P 500

The iShares Russell 2000 ETF (IWM) is fading once again relative to the S&P 500 as it trades below the declining 200-day moving average and the 2015 lows. The RSI of the ratio has exitied a deeply oversold position but remains in bearish ranges. 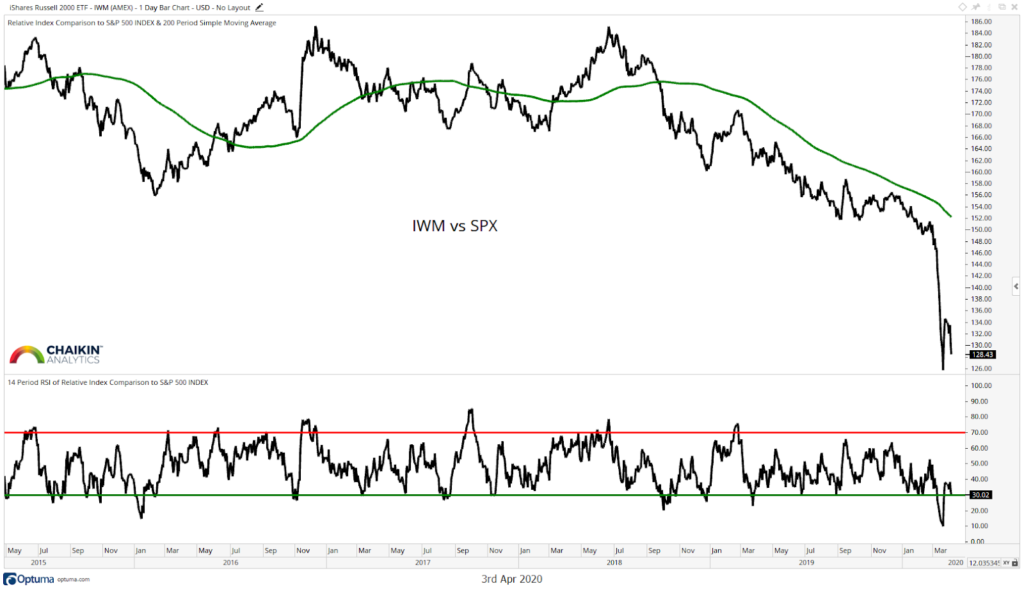 The ratio of consumer discretionary stocks relative to consumer staples stocks continues to trade below the declining 200-day moving average and broken support. The RSI has exited oversold levels but remains in bearish ranges. 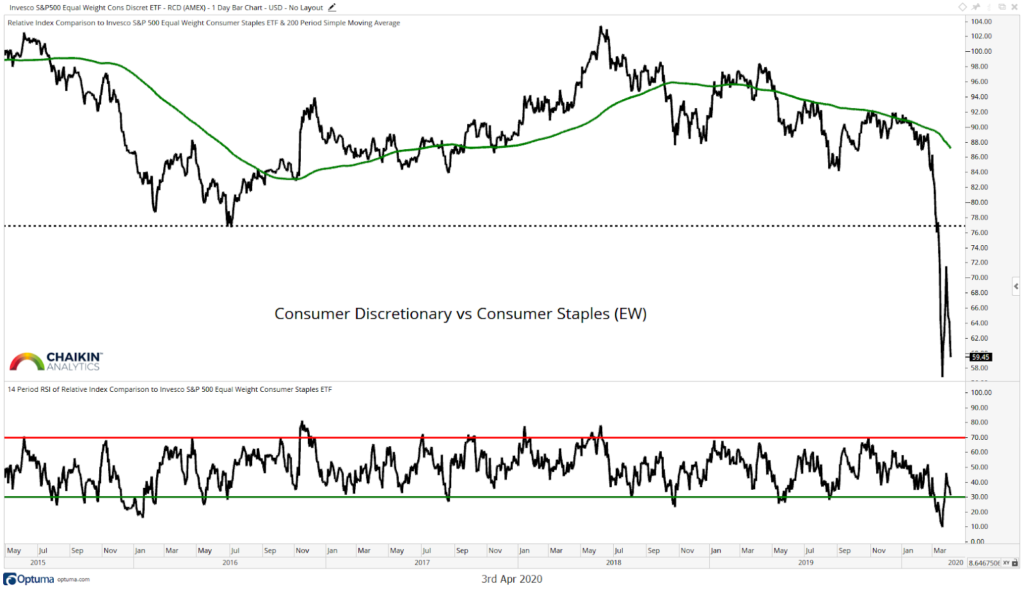 Semiconductors Relative to the S&P 500

The VanEck Vectors Semiconductor ETF (SMH) has broken higher relative to the S&P 500 and is above the support zone from the recent consolidation. The ratio remains above the rising 200-day moving average and the RSI is holding bullish ranges for now. We do note that the recent high was not confirmed by momentum as the RSI has made another lower high. 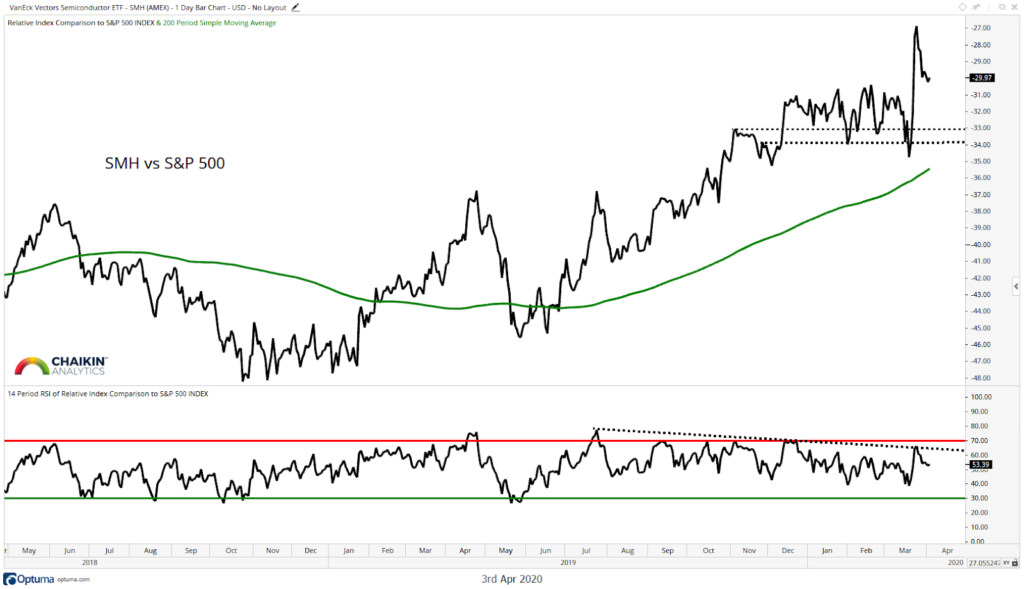 The Invesco S&P 500 High Beta ETF (SPHB) has fallen back below the 2015 lows relative to the S&P 500 Low Volatility ETF (SPLV) and remains below the declining 200-day moving average. The RSI has left oversold levels but remains in bearish ranges. 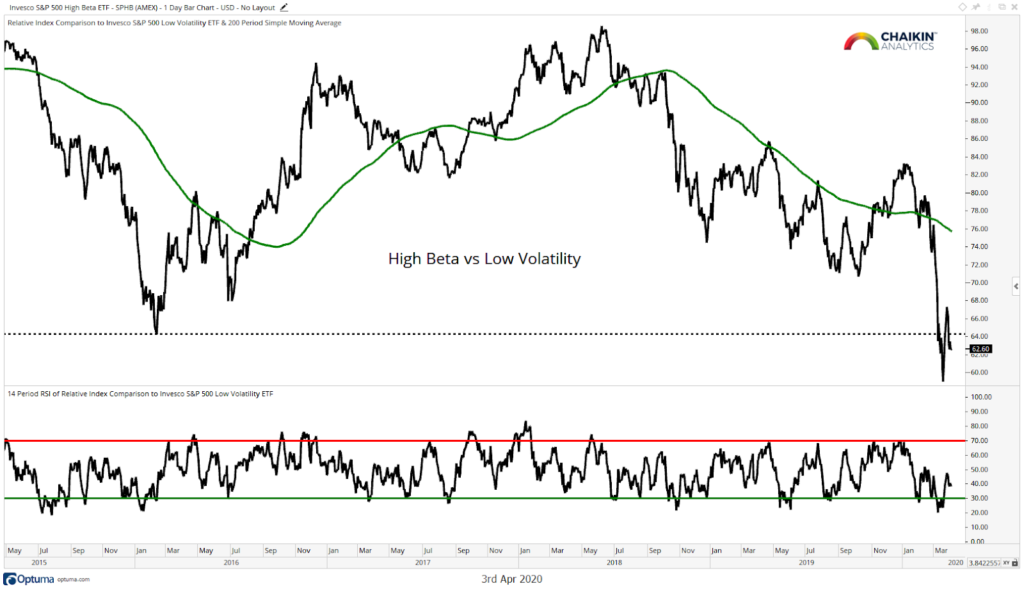 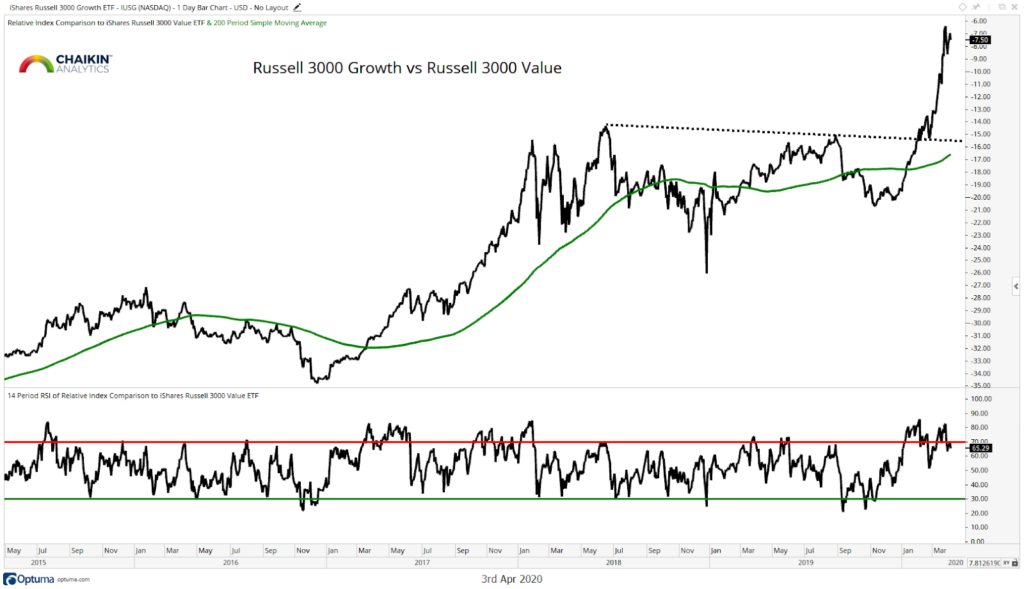 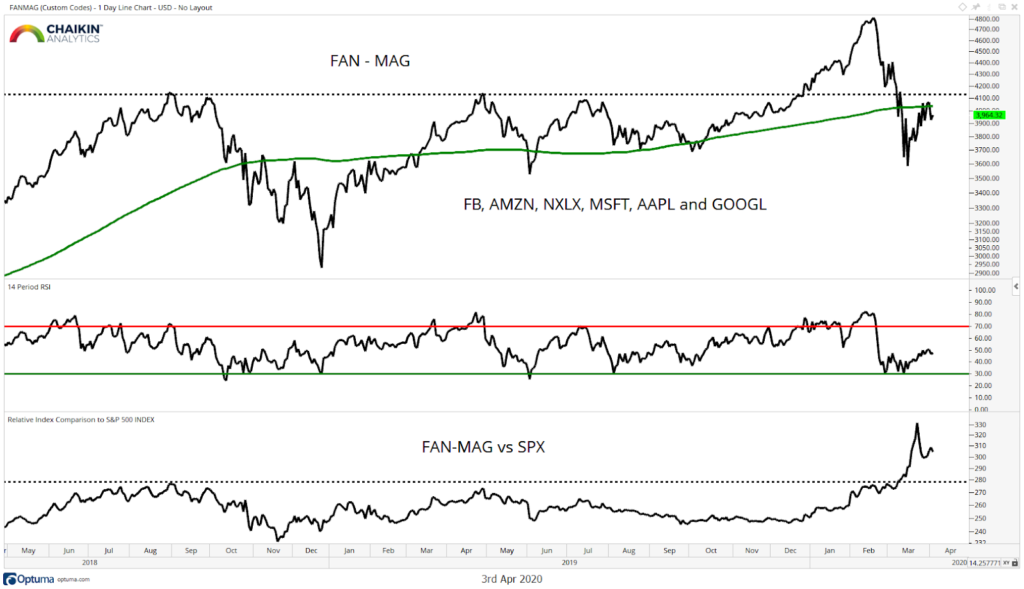 The ratio of Copper to Gold is trading near five-year lows, below the declining 200-day moving average. The RSI is oversold but has made a series of higher lows of late, leaving a bullish divergence on the charts. More time is needed for this ratio to improve. 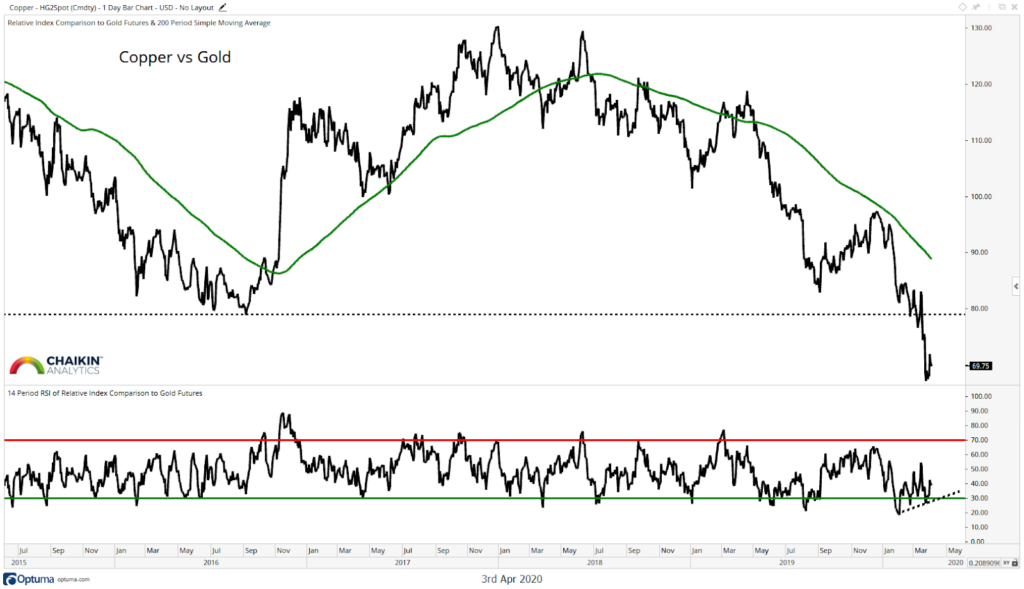 Take-Away: The key themes that we track to gauge the level of risk appetite in the market have faded after staging rebounds last week. The trends remain “risk-off” as the SPY trades in a bit of a “no-man’s land” between support near $230 and resistance near $265.

Posted each Friday morning on our Member Content Blog under the microphone icon:

Love reading Morning Insights? Give a free 14-day trial to a friend and get rewarded.