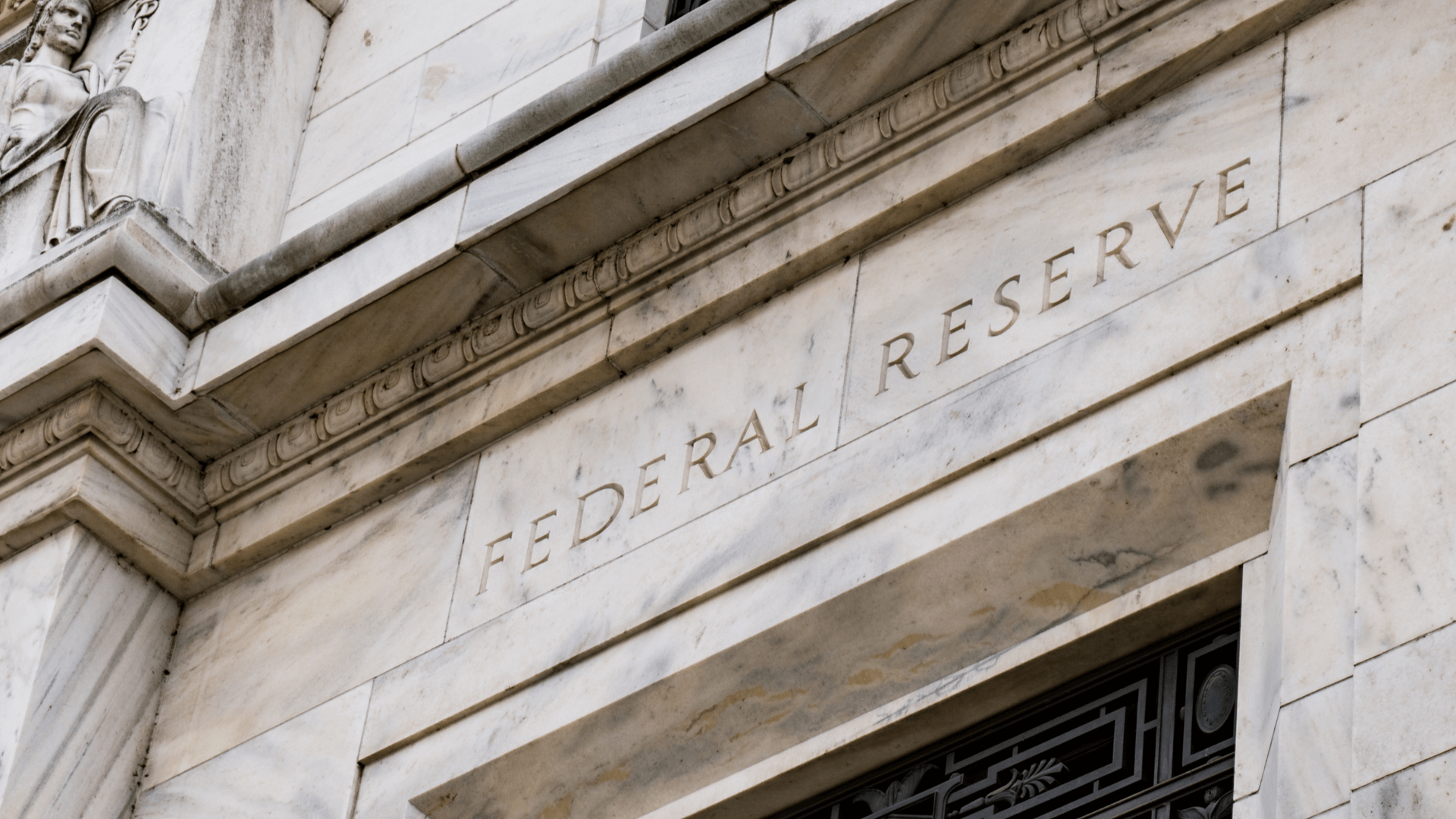 The S&P 500 Index closed Friday at 3,215.63, down 0.28 % on the week. Large cap growth stocks took a breather last week as small and mid-cap stocks traded higher. After making new recovery highs early in the week the S&P 500 Index and the tech heavy NASDAQ 100 Index finished the week lower. Profit taking was triggered by concerns of a loss of momentum in the economic recovery.

While the economic reports were generally good last week, Thursday’s rise in unemployment claims cast some doubt on the pace of the economic recovery. With a number of states implementing a partial rollback of the measures to reopen their economies, some weakness in the more sensitive economic indicators is to be expected.

The question for investors going forward is whether the stock market will continue to look forward to 2021 and beyond with the hoped for vaccines in place to help move the U.S. economy forward. The alternative scenario is a focus on the current economic situation, with all its fits and starts, which could lead to a bull market correction.

Coordinated Monetary and Fiscal Stimulus a Strong Tailwind for Stocks

My view is still one of “don’t fight the Fed’. This week’s Federal Reserve Board meeting should end with a reaffirmation of QE unlimited, the Fed’s ongoing commitment to do whatever it takes to provide massive liquidity to the financial markets and the banking system.

The second half of the coordinated monetary and fiscal stimulus, which has been needed to pull our economy back from the brink of a depression, should be addressed this week as the House and the Senate negotiate the terms of a new fiscal stimulus bill, to supplant the $2.2 trillion CARES Act passed in March.

The House of Representatives has already passed legislation providing $3.2 trillion in a new package, while the Senate appears to favor a $1 trillion package. A compromise in the $1.5 to 2 trillion range should be enough to get the stock market back on its upward trajectory.

The S&P 500 Index has reached our near term resistance area of 3,250 – 3,300 with the technology sector overextended. I expect the stock market to be choppy in the near-term, with positive earnings surprises and vaccine announcements counterbalanced by economic reports that show the economic recovery losing momentum.

If we see a flattening of the curve of COVID-19 cases in the sunbelt states, which is suggested by Google search trends, then it will be all systems go for further stock market gains.

Buy stocks with bullish Power Gauge ratings on weakness only. 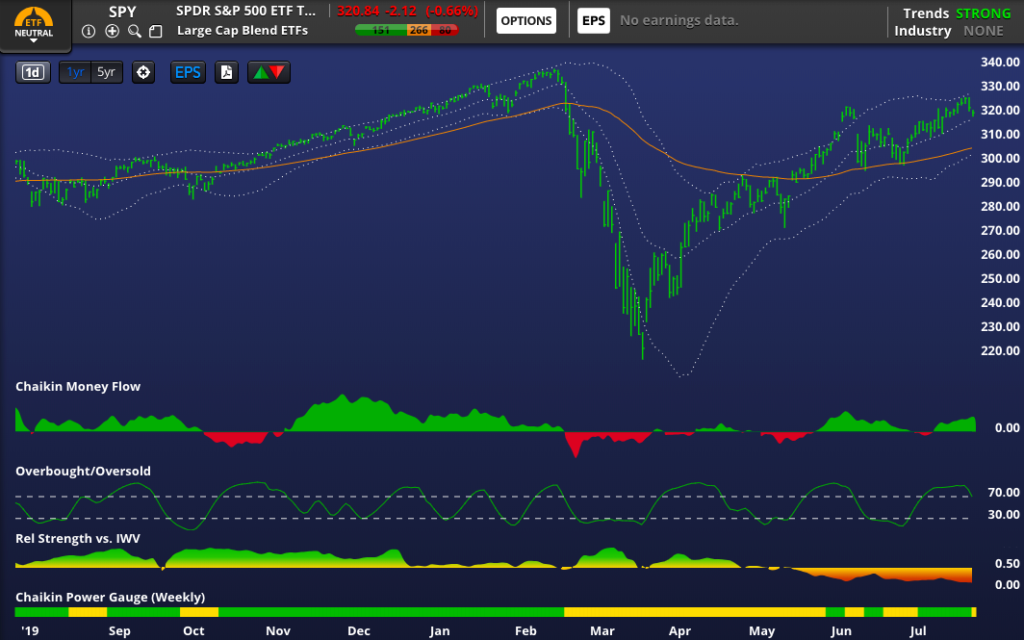 The S&P 500 Index (SPY) made a new recovery high on Wednesday but earnings related selling in Microsoft and Intel triggered profit taking in technology and secular growth stocks. The S&P 500 Index is coming off an overbought reading with the Power Gauge rating for the SPY now neutral. Monday’s trading raised some alarm amongst technical analysts who noted dramatically negative breadth on a day when the S&P Index was up almost 1%, but that proved to be a one day anomaly.

Weak seasonality for the next 1-2 months combined with stretched price and valuation levels for the mega-cap growth stocks suggests a choppy market going forward. The ability of positive vaccine headlines to trigger buying programs is a counterweight to the softening recovery picture.

Last Sunday we noted that, “the technical picture remains strong but a leadership shift away from the mega-cap growth stocks, embodied in the FAN-MAG stocks appears to be taking place” This is what we saw play out last week. 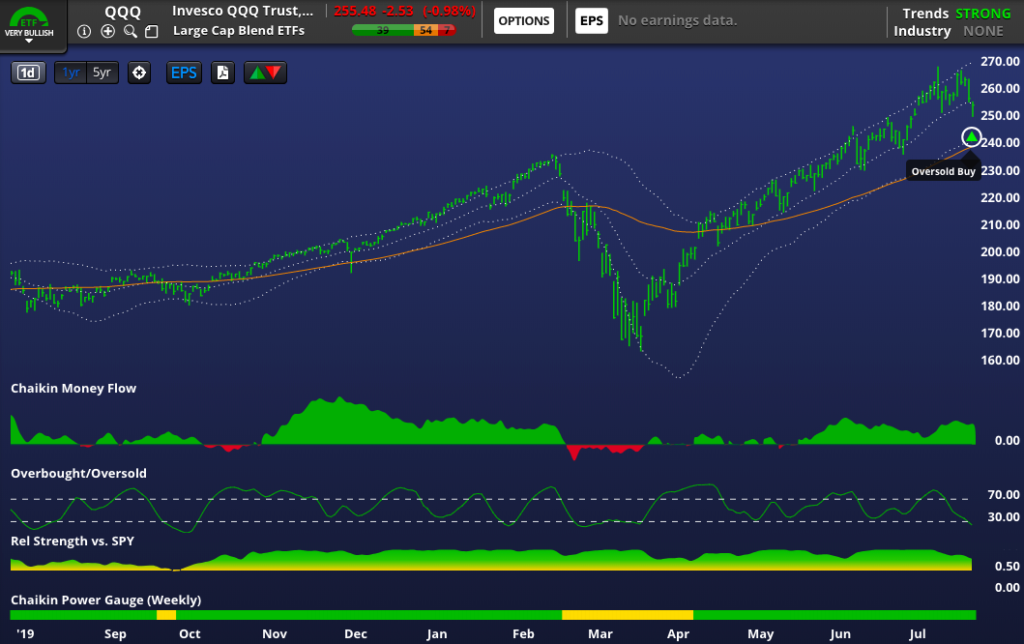 The Nasdaq 100 Index (QQQ) reached a new all-time closing high on Monday, but failed to surpass its 7/13 intraday high. Subsequent price action saw the QQQ break its 21-day exponential average for the first time since April 3.

The QQQ is now oversold with positive Chaikin Money Flow, which is usually a good short-term buy signal. There is very strong support for the QQQ at $240. 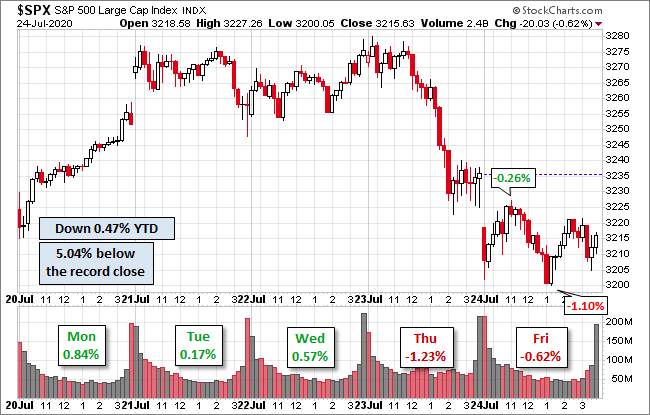 The S&P 500 Index traded up to a new recovery high at 3,280 before weakness in the technology and mega-cap stocks, triggered by disappointing earnings reports from Microsoft and Intel, created a 2 day reversal. Selling on Thursday accelerated late in the day when Wednesday’s intra day lows were broken.

Chaikin Screen of the Week

As technology stocks take a breather, there will be buying opportunities on pullbacks. Thus, I have screened for the strongest stocks in the strongest industry groups. I’m also looking for stocks where analysts are raising their earnings estimates. 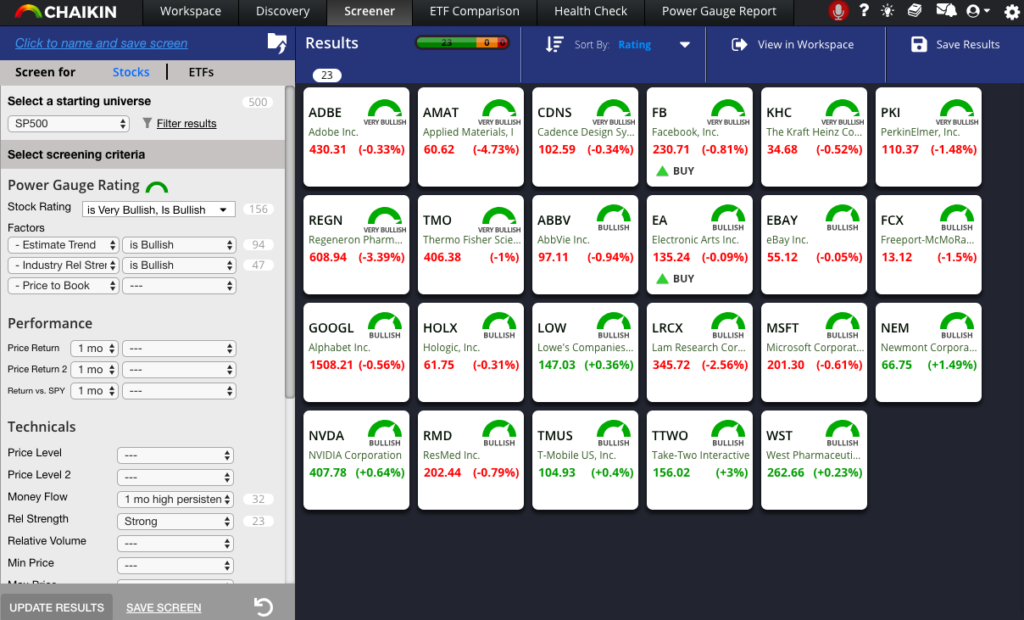 Monitor these stocks for buying opportunities on market pullbacks in the next 5-10 trading days.

The Power Bars for all 3 indices remain in very bullish territory, with the S&P 500 Bull/Bear ratio once again improving to 151 bullish vs. 80 bearish.

As the rally has broadened out, the market has seen the out of favor Financial and Energy stocks trade higher. 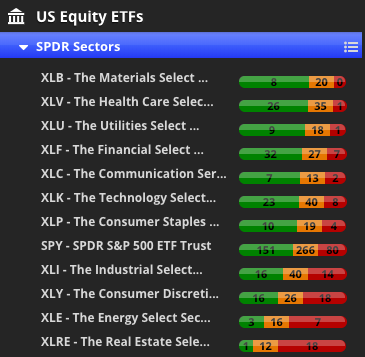 There are 8 sectors with bullish Power Bar ratios of which 7 are stronger than the Bull/Bear ratio for the SPY. Materials, Health Care, Utilities and Financials have strengthened in the past week.

Generate a Portfolio Health Check on any of the Select SPDR Sector ETFs, and see which stocks within the sector have bullish or bearish Power Gauge ratings. The stocks in the bottom left of the Power Grid are sale candidates on rallies. 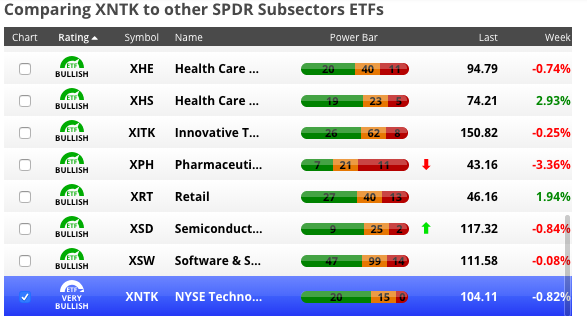 Profit taking in bullish Power Gauge rated industry groups in the Health Care and Technology sectors is setting us up for potential buys in the best rated stocks in these industry ETFs.

Let our ETF Industry Group Power Gauge ratings help you find the stocks to own or avoid in both trading and investment accounts.

Last week saw a continuation of the “earnings beat, sales beat” scenario that has characterized 2nd quarter earnings season thus far. Positive forward guidance also continues to dominate. In general, the response to earnings reports has been positive with the notable exception of some mega-cap tech stocks like Intel (INTC), Microsoft (MSFT) and Tesla (TSLA) which sold off sharply after reporting.

The following stocks saw their Power Gauge Ratings turn Bullish or Bearish ahead of this week’s earnings reports. 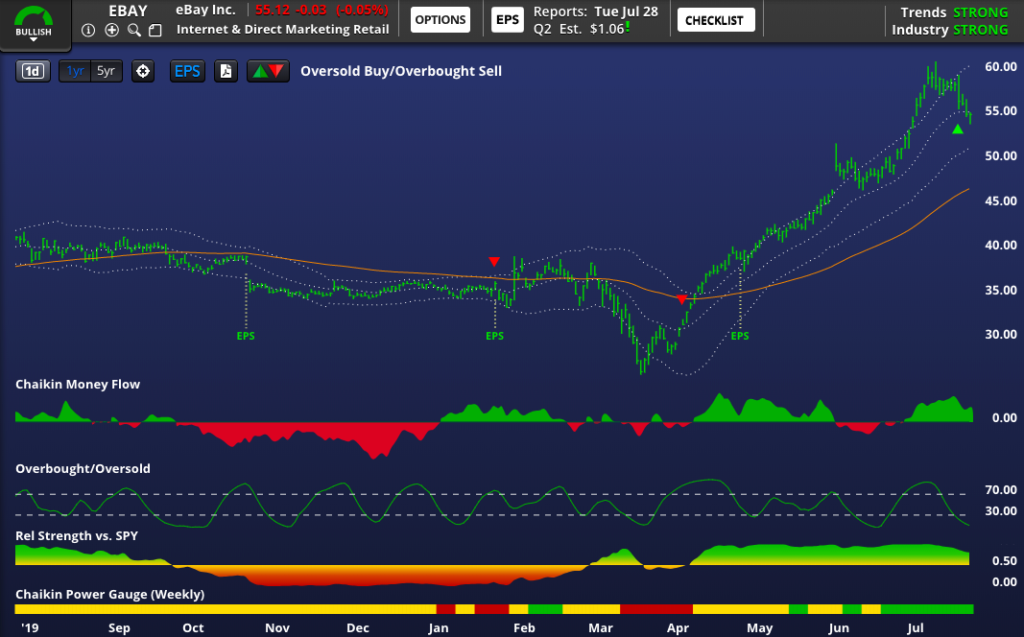 eBay Inc. has a bullish Chaikin Power Gauge Rating and has been outperforming the market since early April. The stock has sold off to $55 from a new 52-week high above $61 and triggered an Oversold Buy in Chaikin Analytics.

Under pressure from activist investor Elliott Management, eBay has been shedding assets like StubHub in late 2019, and last week their Classifieds business. eBay will now focus on its core auction and eCommerce businesses both of which have seen upticks in the COVID-19 pandemic.

EBAY reports 2nd quarter earnings after the close on Tuesday. The stock is typically volatile in after earnings trading but buying into any additional selling pressure on Monday and Tuesday is recommended ahead of earnings. 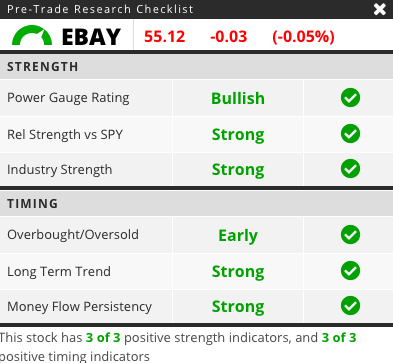 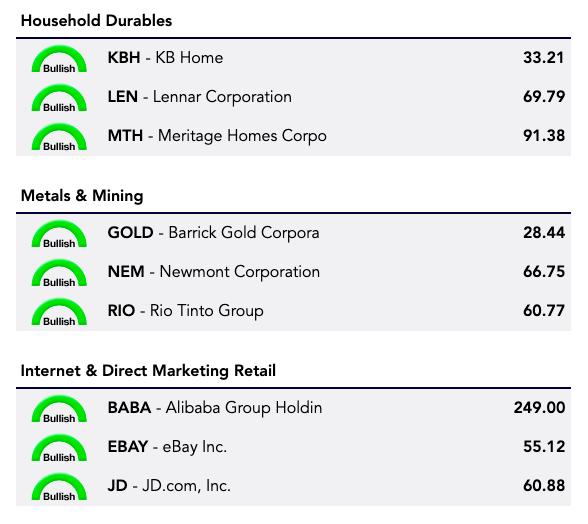 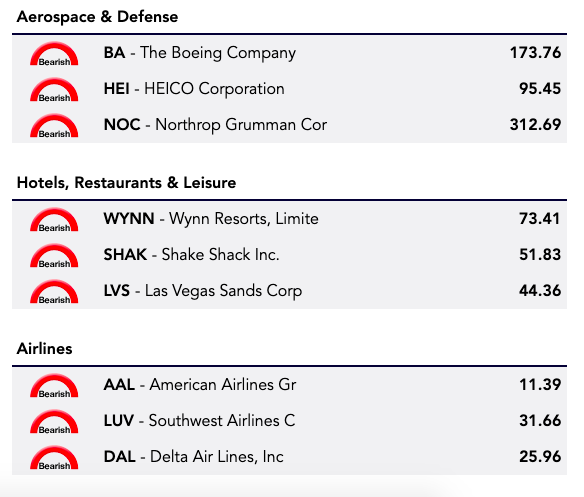