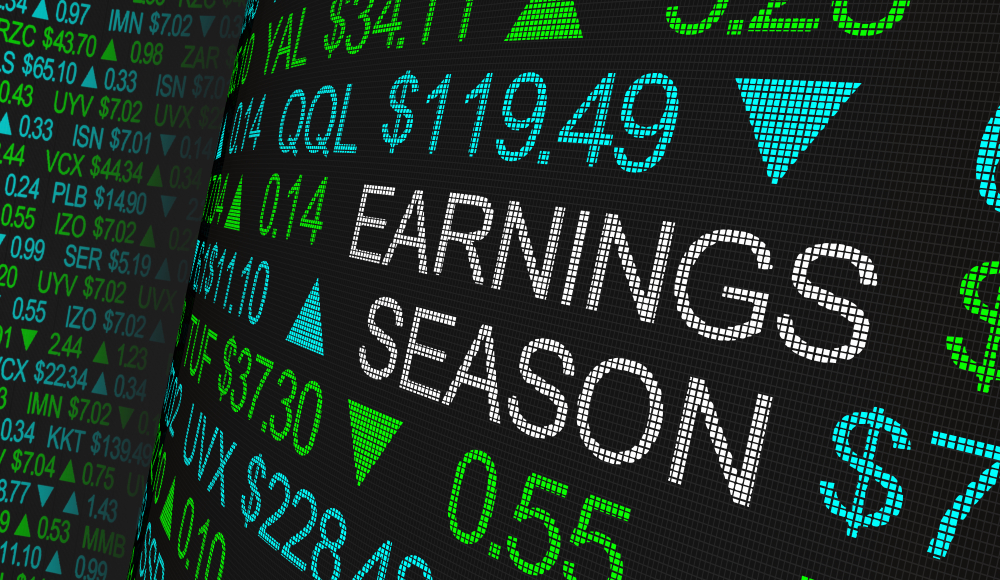 Why bring up the Fed’s comments in the middle of recapping the performance of the major averages? Because what the Fed is telling us (without actually saying the words), is that there is still no economic growth, which is why rates have to be kept pinned to the floor for the foreseeable future. This largely lines up with what our views have been for the past 17 months. We remain in the camp that the equity market can continue to work higher in this little to no-growth environment due to the historic amounts of monetary and fiscal stimulus which have been injected into the economy. The question is who will lead the market higher?

That question was partially answered on Thursday night and in Friday’s trading. On Thursday night after the close, the “Big Four” all reported earnings. Alphabet, Apple, Amazon and Facebook beat the street’s expectations and all but GOOGL saw their stocks rally on Friday. This is important because it could mark the re-ignition of the growth trade in the equity market on which we have been and remained bullish. Recall when I wrote this note three weeks ago, I called out the fact that the growth over value trade was stretched to the upside and that chasing would not be a good strategy. That week began a time of underperformance on the part of growth as investors took down exposure in the names that had run the most. However, the stage could now be set for a resumption of the growth over value theme within the context of the SPDR S&P 500 ETF (SPY) revisiting the February highs. The fund has a Neutral ETF rating but it is interesting to note that the OB / OS Indicator is potentially turning higher without reaching an oversold position. Chaikin Money Flow is bullish and has been increasing over the past few weeks as SPY begins to move topside through the near-term resistance zone that we have been highlighting. Resistance is now in the zone between $330 and $340 while support is in the $310 to $320 range, which we move up this week. The biggest risk to our bullish equity view, in the near-term, would be the failure on the part of congress to pass the next COVID-19 stimulus package.

Under the surface, which is where the real value in market analysis can be found, we see that the Invesco QQQ Trust has a Bullish rating (compared to Neutral for SPY) and has been leading the broader market since last October. Friday’s strong move to the upside on the heels of the aforementioned earnings reports served to tilt relative strength back to the upside. The OB / OS Indicator is moving higher in an oversold position while Chaikin Money Flow remains intensely bullish. Odds favor QQQ moving to new highs after its brief consolidation.

A simple look at the ETF ratings at the sector level confirms the view that favoring growth over value is the best strategy as three of the five funds with Very Bullish or Bullish ratings have growth characteristics: Health Care (XLV), Communication Services (XLC) and Technology (XLK).

This is not a new view for us. However, we find it interesting that one of the other two funds with Bullish ratings points to an emerging theme on which we have been becoming extremely vocal. That is the prospect for rising inflation. The Materials sector (XLB) houses the metals and mining stocks that have exploded to the upside of late. The Materials Select Sector SPDR ETF (XLB) is trading just below 52-week highs as it works off an overbought condition. We have steadily been building the view that investors should have exposure to areas of the investment market (not just equities) that can protect them from the erosion of purchasing power caused by inflation. 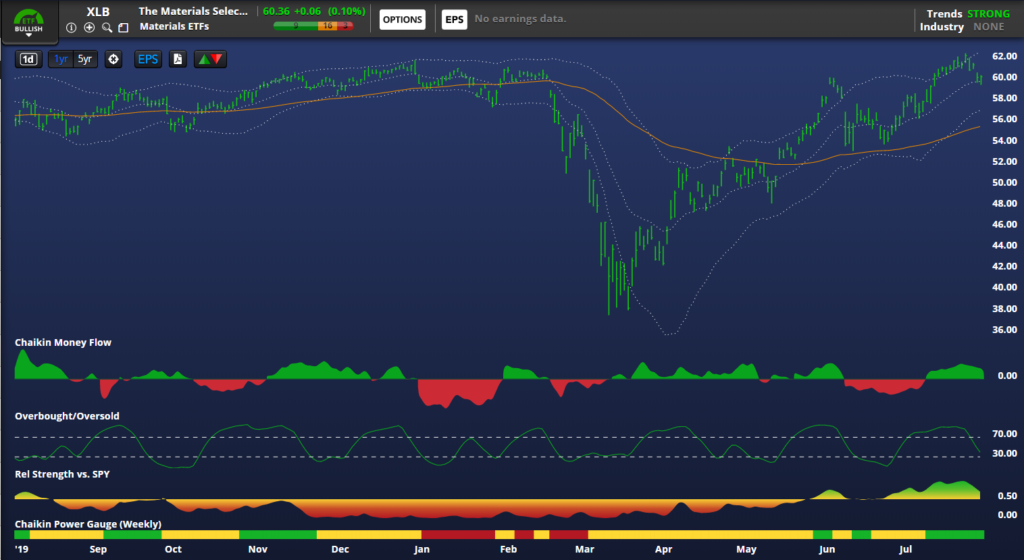 The key datapoint to this view can be found in the performance of the US Dollar, which just logged one of its worst months in recent memory. We have highlighted this development numerous times over the past few weeks and admittedly, the greenback is now stretched to the downside in the near-term. However, with the Federal Reserve keeping rates pinned to the floor and Congress likely to pass the next round of fiscal stimulus to spur the economy as COVID-19 remains a concern, the dollar is likely to remain under pressure from a trend perspective. 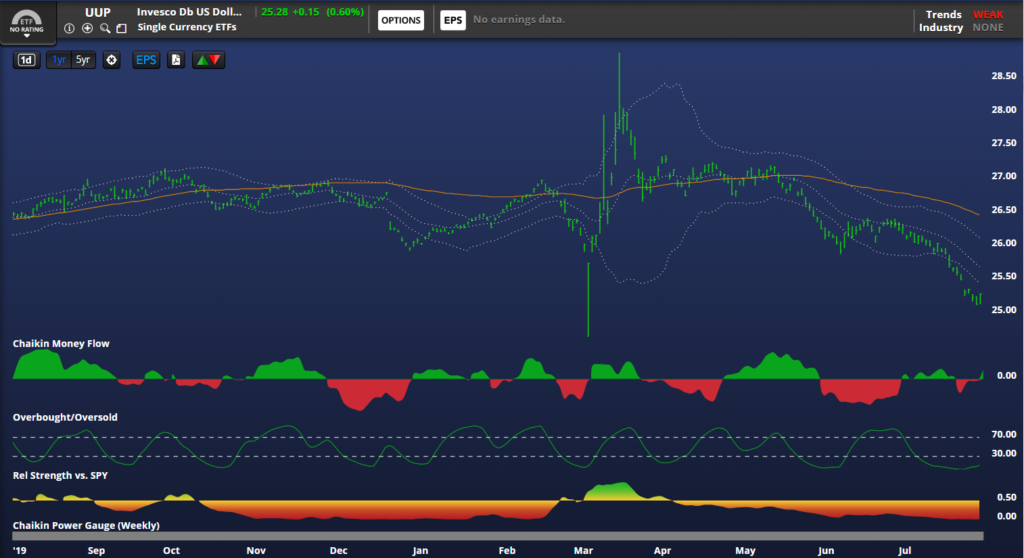 In the near-term, the dollar weakness trade has become extremely crowded (and is oversold as we can see on the chart above), which sets the stage for a possible bounce in the Dollar Bullish Fund (UUP) which would open the door for investors to add to / gain exposure to themes that benefit in an environment of rising inflation. These include the Materials sector, Precious Metals (GLD, SLV, GLTR) and well as Tips (TIP), all of which we have referenced with a bullish view over the past few weeks.

I would characterize the week as volatile but with a slight upside bias based on the 15-minute chart of the S&P 500. The week was not without catalyst opportunities given that it was the busiest week of the second quarter reporting season and there was a Federal Reserve meeting (though it was expected to be a non-event) and we learned that the US economy contracted by an astonishing 32.9% in the 2nd quarter, which actually was better than expected. Equity bulls can take the win for the week as the index closed near its high for the five the day stretch. 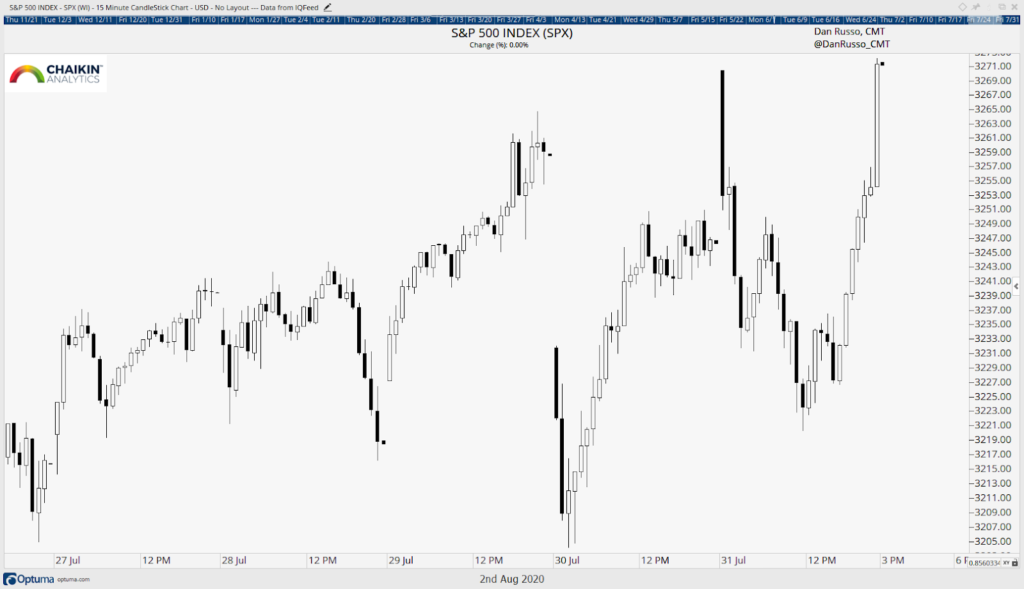 The Power Bar Ratios for the Nasdaq (QQQ) , the Russell 2000 (IWM) and the S&P 500 (SPY) are all skewed in favor of the bulls, the Nasdaq remaining the best of the three. One of the more intriguing stories in the market over the past few weeks has been the effort on the part of small caps to outperform their large peers in a consistent way. Over the past 12 months, the group has tried to muster a charge but have not been able to gain much traction on a relative basis.

Seven sectors of the market have Power Bar Ratios which are bullish and stronger than that of SPY as the new week begins. As mentioned above, from a thematic perspective, we favor the areas of the market that have the potential to protect investors from the erosion of purchasing power brought on in an environment where inflation is increasing. Sectors with bullish Power Bar Ratios to match Very Bullish or Bullish ETF Ratings include: Health Care, Materials, Communication Services Technology and Staples. 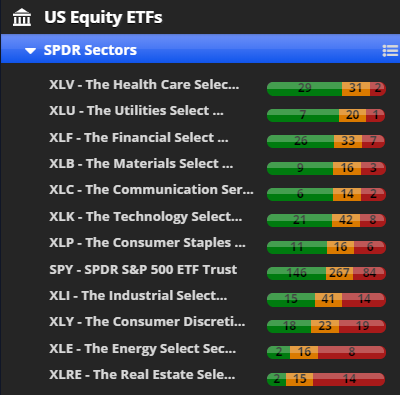 Chaikin Screen of the Week: Earnings

Given our view that “growth” is in a good position to resume its trend of leadership in the days / weeks ahead, we screen the “Growth Stocks” universe in Chaikin Analytics for names which have Neutral or better Chaikin Power Gauge Ratings which have become oversold while maintaining strong Money Flow and Relative Strength.

The screen returned 38 stocks which are set up as compelling ideas and can be used to add exposure to the bullish side of portfolios.

It is going to be another busy week of earnings reports as more than 130 names in the S&P 500 are scheduled to report. Thus far, 63% of companies in the index have reported results with 84% of those beating expectations on the earnings line (69% have beat on revenues). It is safe to say that viability remains low for both management teams and the analysts who cover the stocks. Of the companies which are reporting, we can see which are strong stocks in strong groups and which are weak stocks in weak groups on the Chaikin Power Grid: 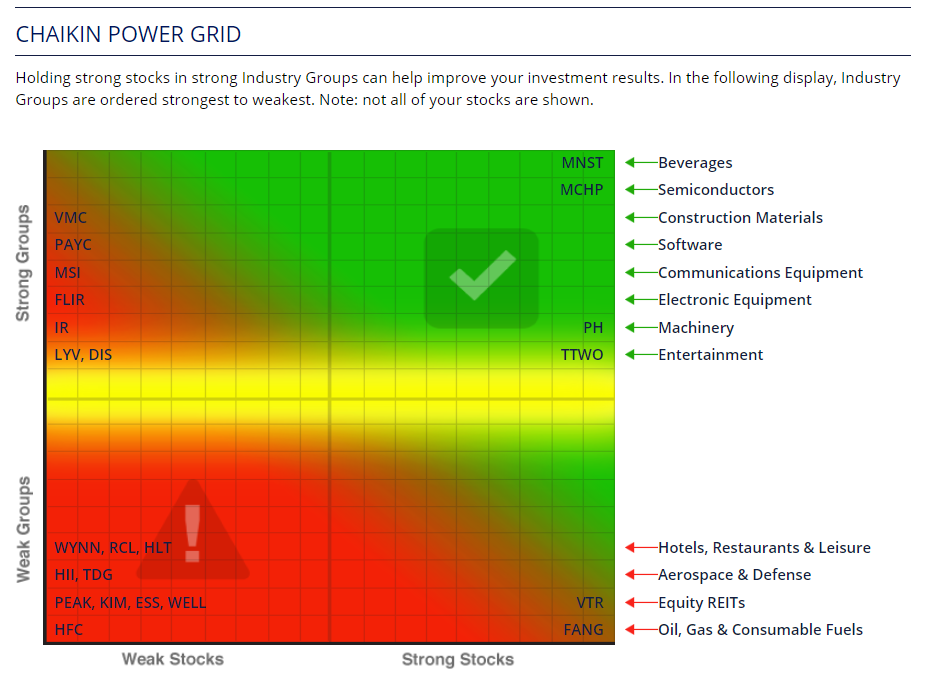 Here we can see which stocks have Bullish ratings and which have Bearish ratings as the new week begins. Focus will be squarely on the “reopening” stocks such as HLT, DIS, RCL and WYNN. In the HealthCare space HUM and MCK are key names along with REGN. TTWO is a leadership stock in the Communication Services space. 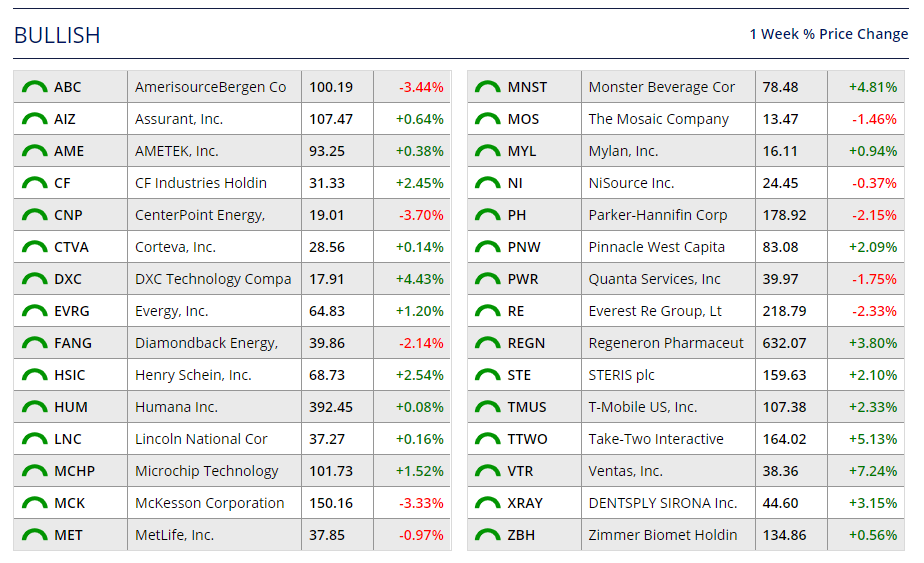 Last Week’s Bullish Stock of the Week, eBay Inc.,  was up 0.29% and remains a compelling setup from a technical perspective. 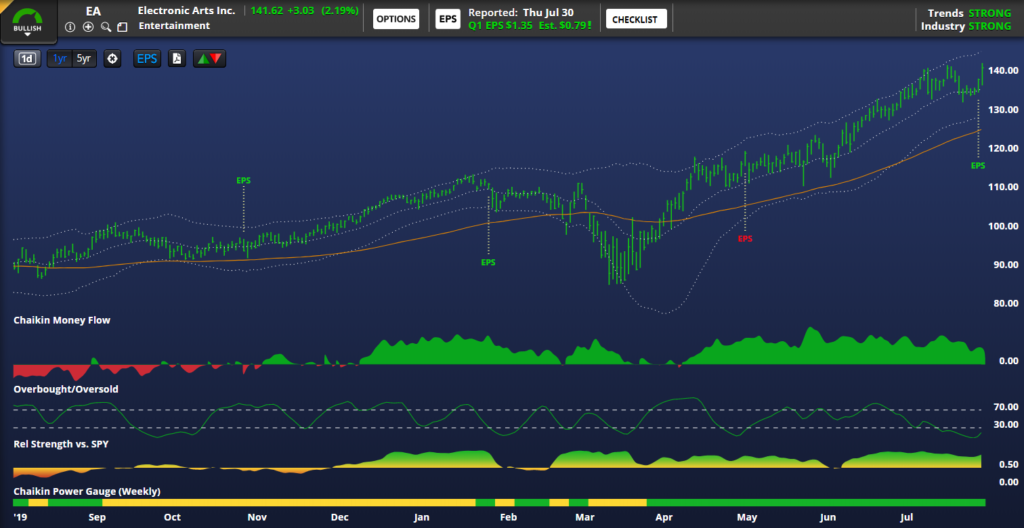 After reporting results that beat estimates last week, EA is trading near a 52-week high and has an OB / OS Indicator that is moving higher in an oversold position. The Power Gauge Rating is Bullish and EA has seen the intensity of its relative strength increase over the past week. Chaikin Money Flow is bullish and EA is above the rising long-term trend line. The 21-day ATR is $3.46. 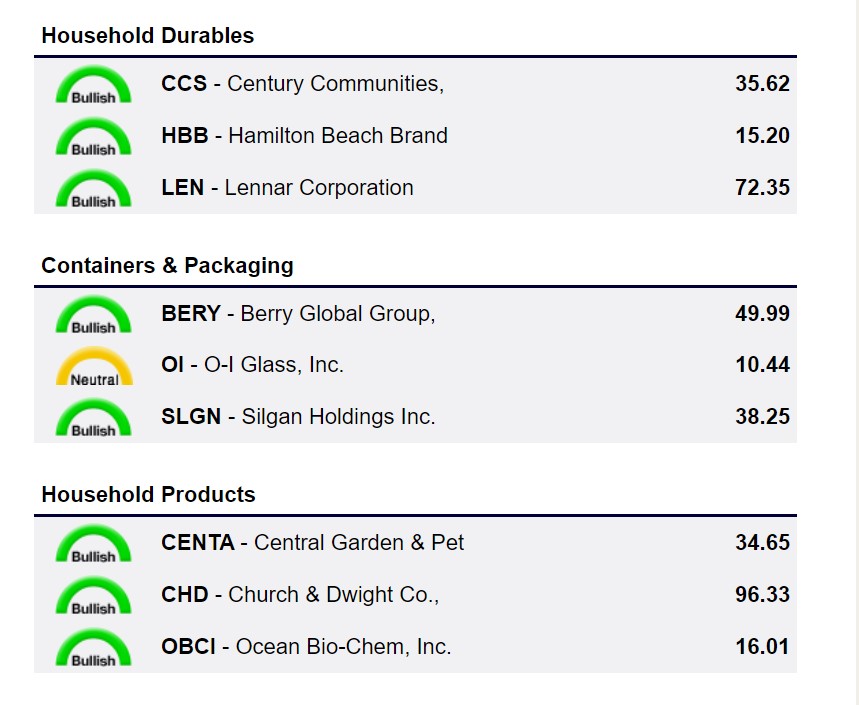 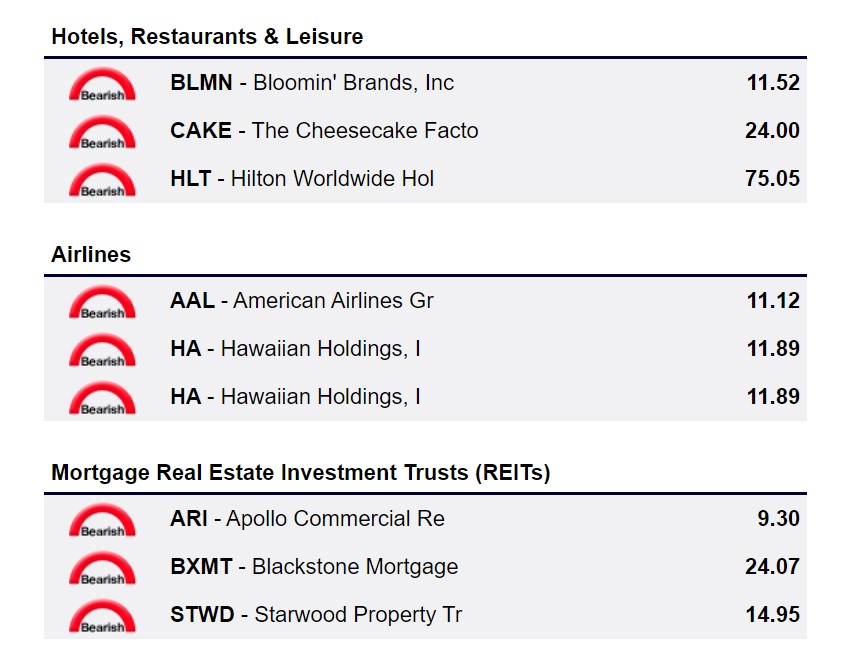